What originally runs the risk of being a pretentious best-friends-fighting-in-the-desert borefest turns out to be an interesting study of what happens when your best bud becomes someone you would rather not share the same universe with, let alone a beat-up pick-up truck. The two friends are not always sympathetic, but we understand their motivations and the film refuses to side with either of them.

Mitchell (Josh Duhamel, who did those two giant-robot movies by the filmmaker we all like to make fun of) and Carter (pudgy Dan Fogler, who until now primarily acted in critically-bashed comedies) are two friends driving through the desert. We don't know exactly where they're going, as their destination matter not to us; what we do know is that Carter's a starving artist (some might say 'loser') who lives in his car and struggles to sell a novel, and Mitch is a family man with a wife and a little boy, who begrudgingly makes the rounds through an excruciatingly boring job at the office.

I won't go into the details of how they end up stranded in the desert with nothing to eat except dry ice and jelly beans. We felt tension between the two old friends initially, now the unease explodes into full-blown hatred and disgust. This is can be a good set-up for both a thriller and a black comedy and is, mean humor runs throughout this film that makes us laugh in spite of ourselves.

In between their vicious bouts of verbal bile and outbursts, the men share their insecurities and fears. And as the boiling hot days give way to frigid nights, they become increasingly disillusioned about their chances of survival. The insights into male middle age are not always kosher or kind, but they are honest and cleverly written.

Josh Duhamel does a very good job as Mitchell; Dan Fogler sometimes falters being unsure of the balance between pathos and black comedy but still impresses, especially considering where he came from. The twist ending is a bit predictable, but still brilliantly executed. On a random side note, I wish they had gotten an obese woman to play Mitch's wife. He talks frankly about how he has a hard time getting it up looking at her post-pregnancy body, and then she turns out to be gorgeously thin? Come on.

"Scenic Route" might be a waste of time for some people, but for those who like conversationally driven thrillers with darkly comic undertones will be more than happy to soak in the film's subversive pleasures. The only film I can compare it to is "Buried" with Ryan Reynolds, if you like that kind of talky, tense film with an isolated setting, you will probably like this. As is, I found this a very underrated movie with a surprising cast. I hope you like it as much as I did.
Rating-
7.5/10 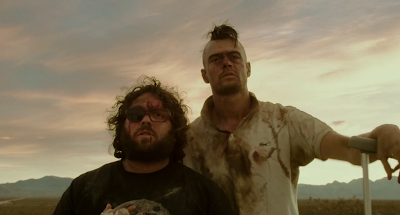