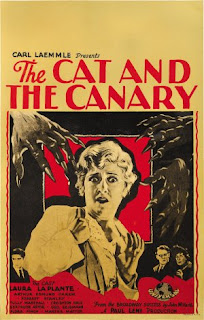 Although "The Cat and the Canary" isn't sure what it wants to be- a slapstick comedy, a whodunit, or a straight horror movie- intriguing characters and excellent performances from the cast keep this one fresh and charming.

Half-mad millionare Cyrus West dies in his creepy mansion, leaving the name of his benefactor in his safe. Like flies to a freshly bloated carcass, his family gathers at the mansion, waiting to snatch up his sizable fortune.

There is a potentially deadly catch... the person who wins the money must spend the night in West's reportedly haunted mansion, and pass a sanity test short thereafter. The dubious 'winner' turns out to be Cyrus' niece, Annabelle West (Laura La Plante).


Not at all eager to spend the night in a haunted house, Annabelle nevertheless faces the grueling night ahead. The situation reveals itself as more dire than was expected when it is revealed there is a killer on the loose, every one's a suspect, and *drumroll* no one can leave.

There are eight people in the house- a lawyer, a maid, an aunt, two nieces, and three nephews, including addled Paul (Creighton Hale,) who suffered a little accident as a child and has never been quite the same.

Paul and Mammy Pleasant (Martha Mattox) the anything-but housekeeper and companion to Cyrus in his final days are the stand-out performances and interesting characters. Hale manages to be grotesquely awkward and spazzy yet charming, while Mattox is memorably creepy the foreboding Mammy.

The whole cast play their parts well, and the characters have good chemistry. The only characters I felt were not really necessary to the script were the nephews (besides Paul.) They served their purpose as bickering big-heads, but I wonder, was their role really vital to the script?

The others were vital parts to both the comedy and the mystery components. The cinematography and score were pretty good, and the whole experience proves you don't need big bucks or outstanding technology to make a good movie, just like you don't need poor effects or a low budget to make a bad one- I'm looking at you Michael Bay (sorry, I still haven't gotten over the "Revenge Of the Fallen: catastrophe.)

I also loved how the mentally-handicapped guy turns out to be the hero, although I would have liked if the female lead had toughened up and defended herself  little more (but taking a feminist perspective on the film is futile, this is the 1920's, after all, Women's Lib still has a long way to go.)

"The Cat and the Canary" is a fun, unpredictable classic with one of the best casts I've ever seen. I wonder if a more downbeat ending might have been in order, but still, I have no real complaints. There are five other versions of this film (although one of them is a 'lost film', and now I'm intrigued... I want more! Good day and happy watching!
Rating-
8.0/10 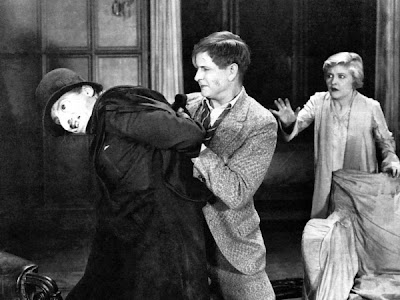