I haven't posted consistently, at this blog, in a while. I'm navigating a couple of life transitions and even more erratic and unfocused than usual. :-) 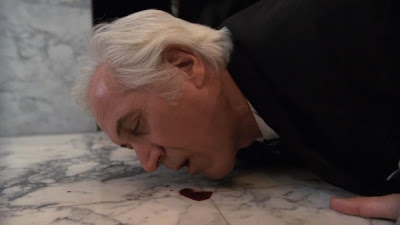 Cronos by Guillermo del Toro (Sarah's Review) -- Both Sarah and I were disappointed in this one, which began with promise then seemed to devolve into a cheap horror flick. But it was del Toro's first feature-length movie, and it was interesting to see some of the imagery and themes that would be explored in later, better, films.

P.S. (My Review) -- I'm still not entirely sure what I thought of this movie. I didn't fall in love with it, but it seems to have improved upon reflection. The thing I appreciated most was the way it explored our tendency, in intimate relationships, to project our needs and desires onto another person. I think this is the basis for many -- if not most -- relationships in their earliest stages. It isn't until we finally shed those projections that things start to get real.

The Sessions (My Review) -- I enjoyed this movie a lot. It had a bit of a "typical Hollywood" feel, but it managed to rise above that. Of course with such a talented cast, including the magnificent John Hawkes (Winter's Bone, Martha, Marcy, May, Marlene), that isn't surprising.

Next Up: Side Effects and The Hit.

We started watching Side Effects but ran into a schedule conflict and had to turn it off. I was liking it a lot -- the characters and cinematography hooked me right away. This is good news, since I was skeptical going into it. Anything that may be capitalizing on the evils of psychoactive meds triggers a negative knee-jerk reaction in me. Negative knee-jerk reactions can be kind of fun, especially when there are a few drinks involved, but ... well. We'll see. :-)

I'd never heard of The Hit -- it was one of Sarah's picks. She's been on a roll with watching Tim Roth movies lately, which is all good. It looks promising. What's not to like about a story of a hit man and his protegee? And young Tim Roth off the chain can be pure pleasure.

Television: We've been watching Frasier on Netflix streaming (we're on Season 3). This is a sit-com I never got into until recently. It has the same problems I see in most sit-coms, such as predictable, repetitive humor, but I'm really enjoying it. The dialogue is witty and these actors/characters are a lot of fun to watch together.

The Hubby and I are also watching Grimm: an urban fantasy loosely based on traditional fairy tales. It's pretty cheesy, and I'm not all that impressed with the character development. But it is imaginative, and I enjoy seeing what they'll cook up in each episode. Plus the series seems to be getting better as it goes along. I really dug the soccer mom who morphs into a spider-thing and eviscerates her prey. ;-) Never count out us soccer moms.

Next on our Netflix queue: Oz. I'm definitely looking forward to that.

Posted by Anonymous at 7:42 AM