Why I Saw It: My daughter bought a Criterion Collection copy, and I am a big fan of del Toro's work (e.g. Pan's Labyrinth, The Devil's Backbone)

Antique store owner Jesus Gris (Federico Luppi) and his beloved granddaughter Aurora (Tamara Shanath) make a startling find, a gold insect-like device created in the 16th century. Enclosed inside it is an extraordinary clockwork mechanism and a living creature. He has stumbled upon the chronos device, crafted to give its owner eternal life. But like the monkey's paw, it will inevitably bring unexpected -- even tragic -- results. 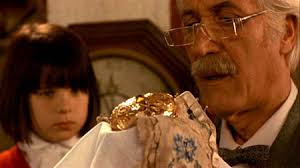 This film captivated me in the beginning with intriguing imagery -- including clocks, crumbling wooden angels, and a golden insect with a piercing stinger -- and characters I wanted to get to know. I liked the way it seamlessly combined a mythological story, highlighted by eerie images, with realistic themes, such as facing one's mortality and struggling with the subtle physical changes that come with aging. However, the second half of the movie was a let-down for me. I felt it degenerated into something resembling a low budget horror movie. 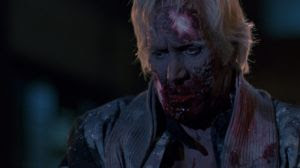 Nevertheless I don't regret watching this movie, which was del Toro's first feature-length film. I enjoyed the strong acting and unexpected moments of bizarre, dark humor. And it was fascinating to see the style del Toro perfected in movies like Pan's Labyrinth and The Devil's Backbone -- seamlessly weaving together an eerie mythical tale and a realistic, very human story -- blossoming here. I also saw some of the themes and ideas, including evocative images of clocks, that would resurface in his later work.
Posted by Anonymous at 6:49 AM