46. Some Mother's Son, Directed by Terry George
Starring Helen Mirren, Aidan Gillen, & John Lynch
Mom Kathleen (Mirren) struggles to decide whether to put her son, IRA prisoner Gerard (Gillen) on life support against his will when he succumbs to his self-imposed starvation. Little-known alternative to Steve McQueen's "Hunger" is not as artistically satisfying but still well-made and very well acted. Found on my quest to watch (almost) every Aidan Gillen movie ever made.

48. Marley and Me, Directed by David Frankel
Starring Owen Wilson, Jennifer Aniston, & Alan Arkin
I am a major dog lover, so I was crying buckets at the *SPOILER* unbearably sad conclusion. But it's worth the tears, and Owen Wilson is actually a better actor than you might think.
Favorite Character- Marley

49. Brave, Directed by Steve Purcell, Brenda Chapman, & Mark Andrews
Starring Kelly McDonald, Emma Thompson, & Brendan Gleeson
Are you sick of all the well-behaved, perfectly proper princesses who get up and brush their immaculately neat hair and stare at their flawless complexions in the mirror? "Brave" is your fun alternative.
Favorite Character- Meridia

50. Up, Directed by Pete Docter

Starring Ed Asner, Jordan Nagai, & Christopher Plummer
Not many animated movies can make me cry. Not many movies at all can make me laugh and cry, but "Up" does all of the above, presenting viewers with a story both rapturous and heart-wrenching.  So few kids' movies of today are intelligent, but "Up" has a big brain and its heart in the right place, appealing to kids and adults alike. Brilliant. 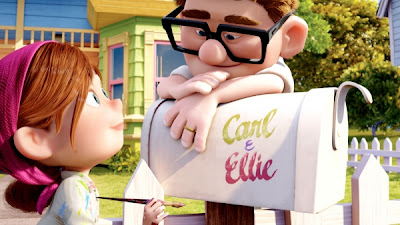