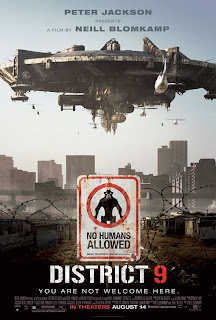 I wasn't a fan of this film when it first came out, but I must admit after three or four viewings I have quite grown to like it. It's an action movie, and for all intents and purposes an intelligent one, but don't expect a ton of depth in terms of character development or symbolism.

The plot is pretty simple- a colony of about 1.5 million bug-like aliens have their ship break down on them above Johannesburg. After several months of the ship just, well, hovering there, a team of people get inside the ship and find that the aliens are agitated, starving, and living in their own filth.

The "colonization" of the aliens goes pretty much exactly the way I thought it would in reality -- no laser beams, no probing, just good ol'-fashioned oppression and humans sticking their noses where they don't belong. The people build a ghetto for the aliens to live in squalor and fear, and tensions rise.

The "hero" at the center of the story is Wikus Van De Merwe (Sharlto Copley) a clean-cut bureaucrat who does everything asked of him with punctuality and zest. The film is told in found-footage "flashback," where friends and family lament the fate of poor Wikus, who seems to have gotten himself in too deep.

The turning point in Wikus' life seems pretty typical for movies like these, as he ham-handedly slimes himself with some alien goo, which incites his transformation from a man to... wait for it... one of them. As soon as he begins changing, he is considered barely even human and the people he once considered friends want to dissect him and use his parts for their own ends.

As you can probably guess, Wikus seeks help in the most (ahem) unlikely place... from the creatures he once feared and hated. The actor Sharlto Copley is great here, and I'm glad he seems to be getting more recognition. I don't usually like action movies (especially ones like the "Transformers" series that rely too heavily on CGI,) but this one was pretty good in that it didn't let the special effects dominate the movie and it had a point.

Despite the fact that it's a story about tolerance and a allegory of Apartheid, things don't get that sappy, and Wikus' change of heart, ever so slight, doesn't seem too forced or implausible. I would have liked to have seen some more development of the two main aliens, personally -- the character development there seemed to be a little weak.

I know it's such a cliche to hail the special effects of a mainstream movie, but the creation of the aliens, or "prawns," as they are not-so-affectionately called, is really quite extraordinary. It's hard to make insect-like extraterrestrials sympathetic or even plausible, but this movie pulls it off.

"District 9" is definitely worth a watch, mostly for the strength of Copley's performance. None of the other performances really stand out, but then again, Wikus and the aliens are given the majority of the screen time, so it would take someone really extraordinary (maybe like Christoph Waltz) to steal the spotlight from them.

Action film skeptics and people who don't know the first thing about Apartheid should still like this, because the movie doesn't dwell in explosion territory, and the theme is selective yet somehow universal: that people fear what they don't understand and that most people will do as they're told and lack the strength to do otherwise. Chew on that, film-goers. 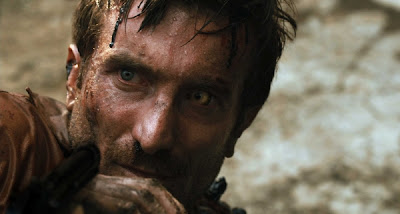