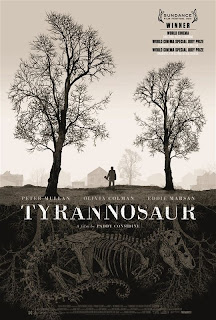 Emotionally devastating and rewarding, a study of desperate individuals with seemingly nothing to lose, "Tyrannosaur" is one to put on your watch list. Now. Featuring electrifying performances from Peter Mullan, Olivia Coleman, and the criminally underused Eddie Marsan, it is as riveting as it is disturbing and shocking.

Joseph (Peter Mullan) is a man seething with rage and contempt. When we first see him, he is leaving a bar after a fight. Irritated suddenly by the whining of his dog, tied up outside, he gives it a fatal kick in the ribs.

Joseph seems to have this effect on everyone who crosses his path, and he certainly seems incapable of any lasting change, but that doesn't stop kind Christian charity shop worker Hannah (Olivia Coleman) from trying to help, to Joseph's great puzzlement.


Hannah, despite her soft and motherly exterior, has a heapful of s**t going on at home. Heartbreakingly unable to have children, she is also saddled with the world's biggest d**k as a husband - James (Eddie Marsan,) who abuses her in every way possible.

How these two lonely souls find each other is the subject of this discomforting drama, which to me is the most genuinely distressing film since Simon Rumley's "The Living and the Dead." "Tyrannosaur" thrives on that stark realism we've come to expect from the Brits, but goes deeper than most Brit flicks, let alone American films.

I was in one state of distress or another throughout the film. The violence can be upsetting, especially if you are an animal lover, but don't let a couple of scenes prevent you from watching what is most certainly one of the best British films of the last ten years.

Writer/director Paddy Constantine (actor/co-writer of the also great "Dead Man's Shoes") touches his characters with a little something extra, refraining from turning them into dim-witted caricatures. You get something from this film that you don't get very often- the feeling that you have watched a truly great movie. And how great is that? Recommended. 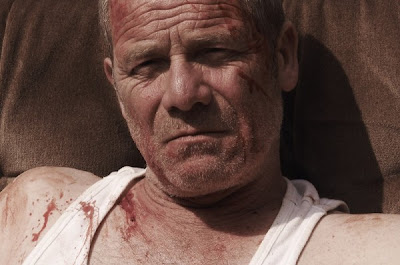